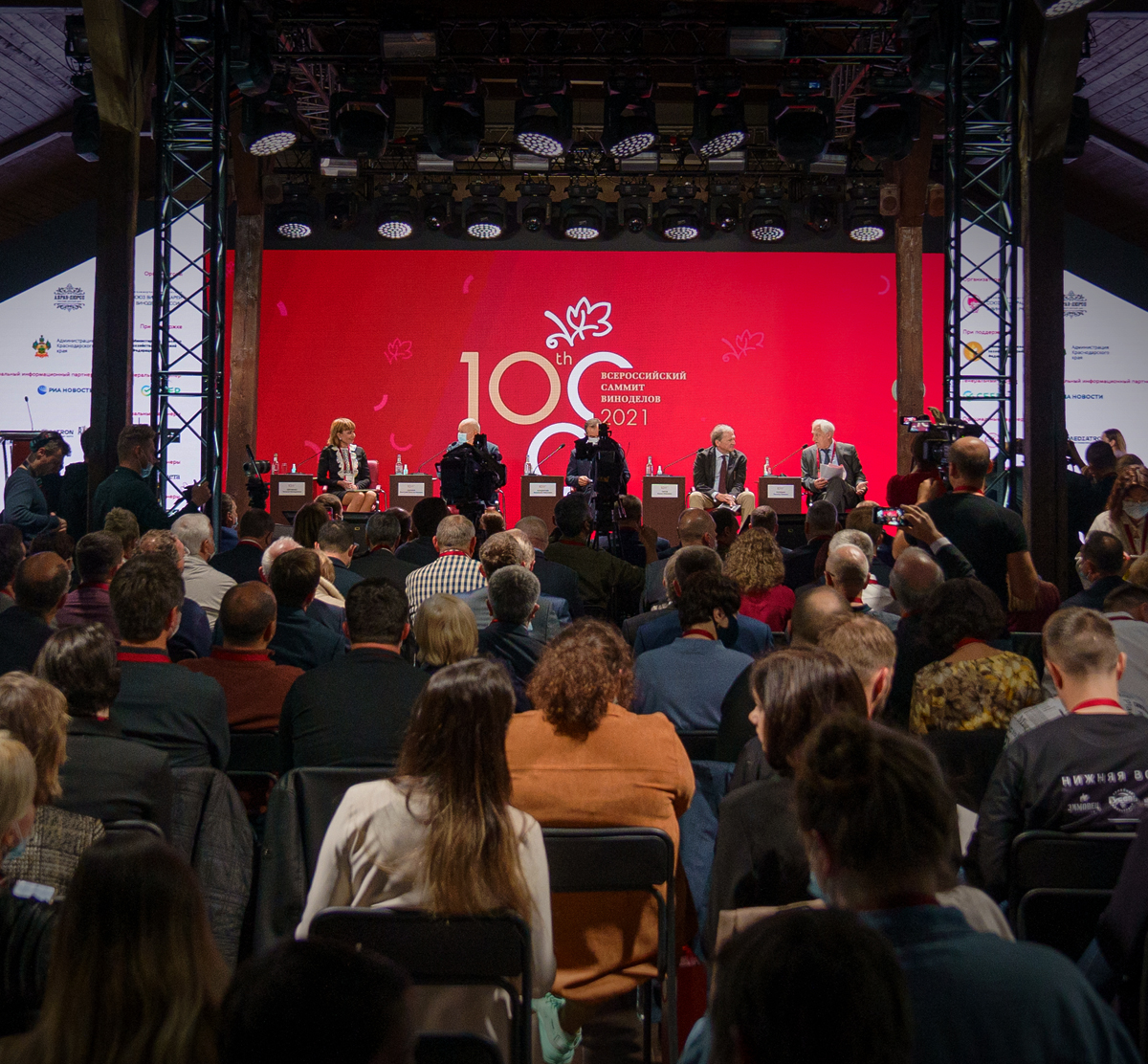 The All-Russian Winemakers Summit, organized by the Association of Winegrowers and Winemakers of Russia (AWWR) and Russian Wine House Abrau-Durso under the auspices of the Ministry of Agriculture of the Russian Federation and administration of the Krasnodar Krai, concluded on October 18 in Abrau-Durso, one of the most famous wine estates of Russia. The industry’s premier event brought together about 1,000 guests, who explored the main trends of the winemaking sector and analyzed its performance in 2021. The awards ceremony of the annual AWWR Cup 2021 tasting contest became the highlight of the Summit.

In his opening address at the jubilee summit, Minister of Agriculture Dmitry Patrushev said: “The All-Russian Winemakers Summit has evolved as a traditional platform to address urgent issues and explore prospects of the Russian winemaking industry. The Federal law on Winegrowing and Winemaking, which came into force in 2020, became an important milestone for the sector. The Ministry of Agriculture has developed a new federal project “Encouraging Winegrowing and Winemaking”, aimed at increasing areas under vineyards by 35% by 2030. To this end, it is planned to allocate at least RUB 2.4 billion annually, with investments totaling RUB 25 billion by 2030.

In his welcome address to the participants of the Summit Oz Clarke, an internationally acclaimed wine critic and an old friend of Russian winemaking, lauded the efforts of the local authorities and the Ministry of Agriculture in promoting Russian winemaking and winegrowing. He emphasized that few countries exercise this approach to winemaking. The expert outlined the key elements contributing to industry development: expansion of the Russian winegrowing geography, as well as creation of wines made from unique autochthonous grape varieties. According to Oz Clarke, the most important wine qualities around the world are its authenticity, sincerity and sense of the terroir – the birthplace of a wine.

One of the key issues addressed at the event was the necessity to create additional incentives to increase areas of vineyards and eliminate obstacles to the development of winegrowing and winemaking in Russia. The open discussion of the challenges faced by the industry focused on the urgent need to amend a number of federal laws and by-laws of the Russian Federation. Another important issue raised at the summit concerned ways to improve the quality and enhance the competitiveness of Russian wines.

President of the Association of Winegrowers and Winemakers of Russia Leonid Popovich presented a report featuring prospects of gross grape yields in years to come. He noted that the federal project “Encouraging Winegrowing and Winemaking” envisages the establishment of 4,850 hectares of vineyards in the period from 2022 to 2030. He also spoke about regulatory amendments that need to be adopted in order to accelerate the development of the industry.

As part of his report, Board Chairman of the Association of Winegrowers and Winemakers of Russia Dmitry Kiselyov praised the work done by AWWR over the past two years since the last Summit of 2019. Most of his remarks focused on the creation of the future industry-wide federal self-regulatory organization. “The adoption by both chambers of Parliament and the signing by the President of Russia of Federal Law 468, which regulates winegrowing and winemaking in Russia, was a fateful life-changing moment. It formulates the concept of ‘Russian wine’. Recently we have seen the concept of ‘sparkling wine’ that complies with the world practice introduced on a regulatory level. It was done in order to eliminate the tradition of referring to all sparkling wines made in Russia as ‘champagne’,” said Dmitry Kiselyov.

Speeches centered on the key topics of the discussion were also delivered by Manager of the Krasnodar Krai Sberbank branch Tatiana Sergienko, President of Russian Union of Sommeliers and Experts Artur Sarkisyan, Executive Director of the Union of Cognac Producers Dmitry Chernev, as well as Member of the State Duma of the Russian Federation Konstantin Bakharev, Member of the Council of Federation of Russia Alexey Kondratenko, and Deputy Chief of the Federal Antimonopoly Service Andrey Kashevarov.

Boris Titov, Presidential Commissioner for Entrepreneurs’ Rights and Co-Chairman of the Board of Trustees of the Association of Winegrowers and Winemakers of Russia, made an important proposal regarding the establishment of the industry-wide federal self-regulatory organization. “Small companies and farms should have a say — a collective, public democratic opinion should be developed, which would reflect the interests of all winegrowers,” said Boris Titov.

The awards ceremony of the prestigious AWWR Cup 2021 tasting contest became a long-awaited highlight of the event. This year’s winners were named by the tasting panel led by Oz Clarke (UK). “I was pleasantly surprised to see that the quality of Russian wine has significantly improved in recent years. It shows that Russian wine is gaining maturity,” Oz Clarke commented as he spoke about the results of the contest.

The international panel chose their favorites in several categories: the best white and red dry still wines, fortified (liqueur) wines and sparkling wines produced by the classical and tank methods.

Special prizes were awarded to:

A special award was presented to Leonid Popovich for his contribution to the development of Russian winemaking.

Furthermore, the Summit featured an exhibition attended by representatives of various winemaking regions of Russia: Kuban, the Don and the Lower Volga regions, Dagestan, Stavropol, Crimea and Sevastopol. The visitors were able to get to know the best samples of Russian winemaking, including the finalists and winners of the AWWR Cup 2021 contest.

More information is available on the official website of the event http://summit.abraudurso.ru