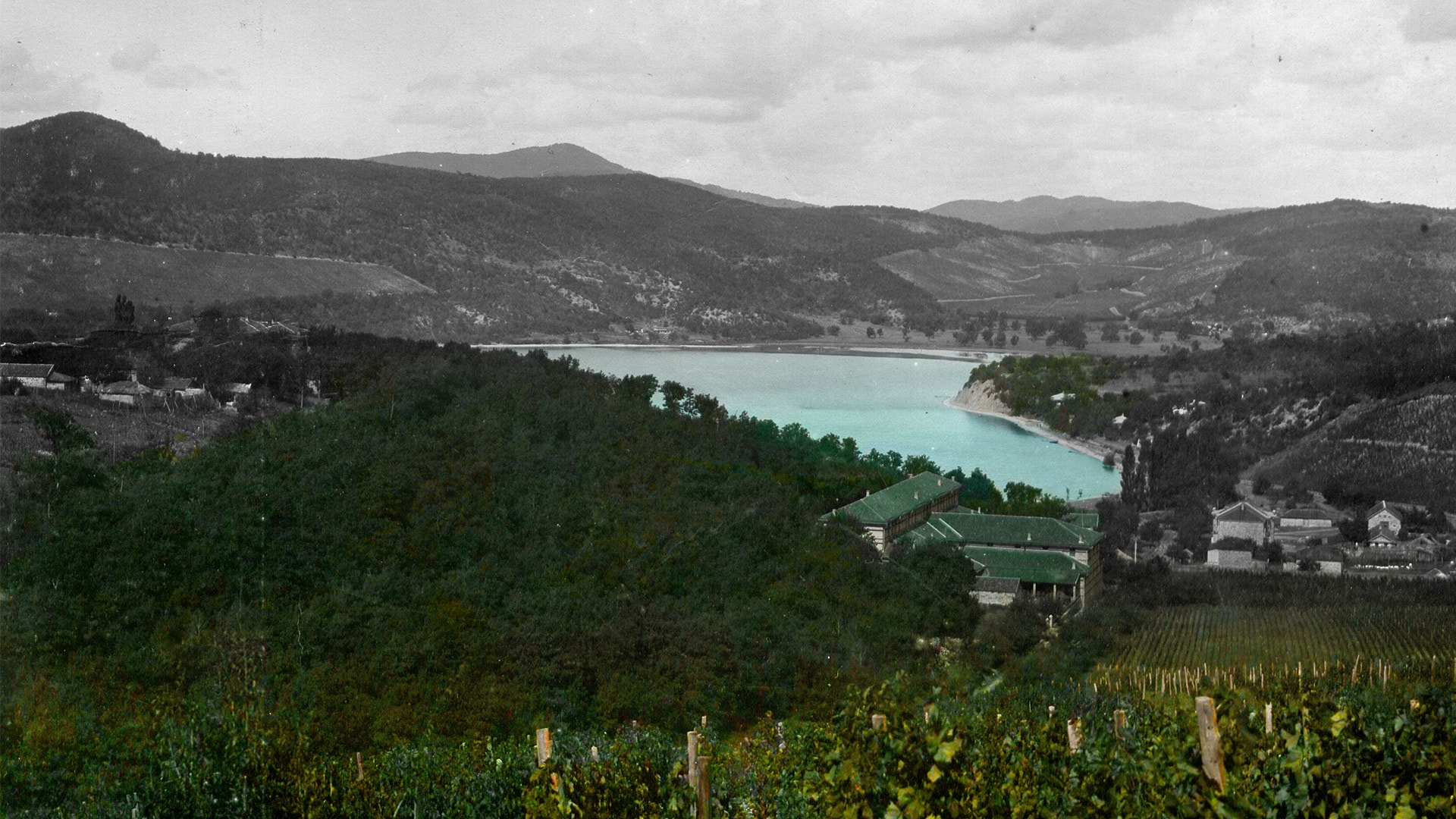 In 2020, Abrau-Durso turned 150. For 150 years, since Emperor Alexander II, sparkling wines, on par with the best wines of Champagne in terms of exquisiteness and complexity, have been made here. During the Tsar times, Abrau-Durso became renown thanks to the famous French Champagne maker Victor Dravigny, who even received two personal awards from Nicholas II.

During the Soviet times, Abrau-Durso sparkling wines were nationally acclaimed. Anton Frolov-Bagreev, a famous scientist and winemaker, was the pioneer of Charmat, the new manufacturing method which allowed preserving quality within large-scale production. The recent history and the rebirth of the estate started in 2006, when SVL Group headed by Boris Titov acquired it. Mr Titov was devoted to the idea of preserving and multiplying the traditions of the local winemaking and of the Russian sparkling wine. Using the experience and the knowledge of the previous generations, he resumed quality sparkling wine manufacturing in accordance with the highest international standards. The Russian Winehouse managed to preserve the heritage and to become the point of attraction for all lovers of wine and gastronomy tourism in Russia. 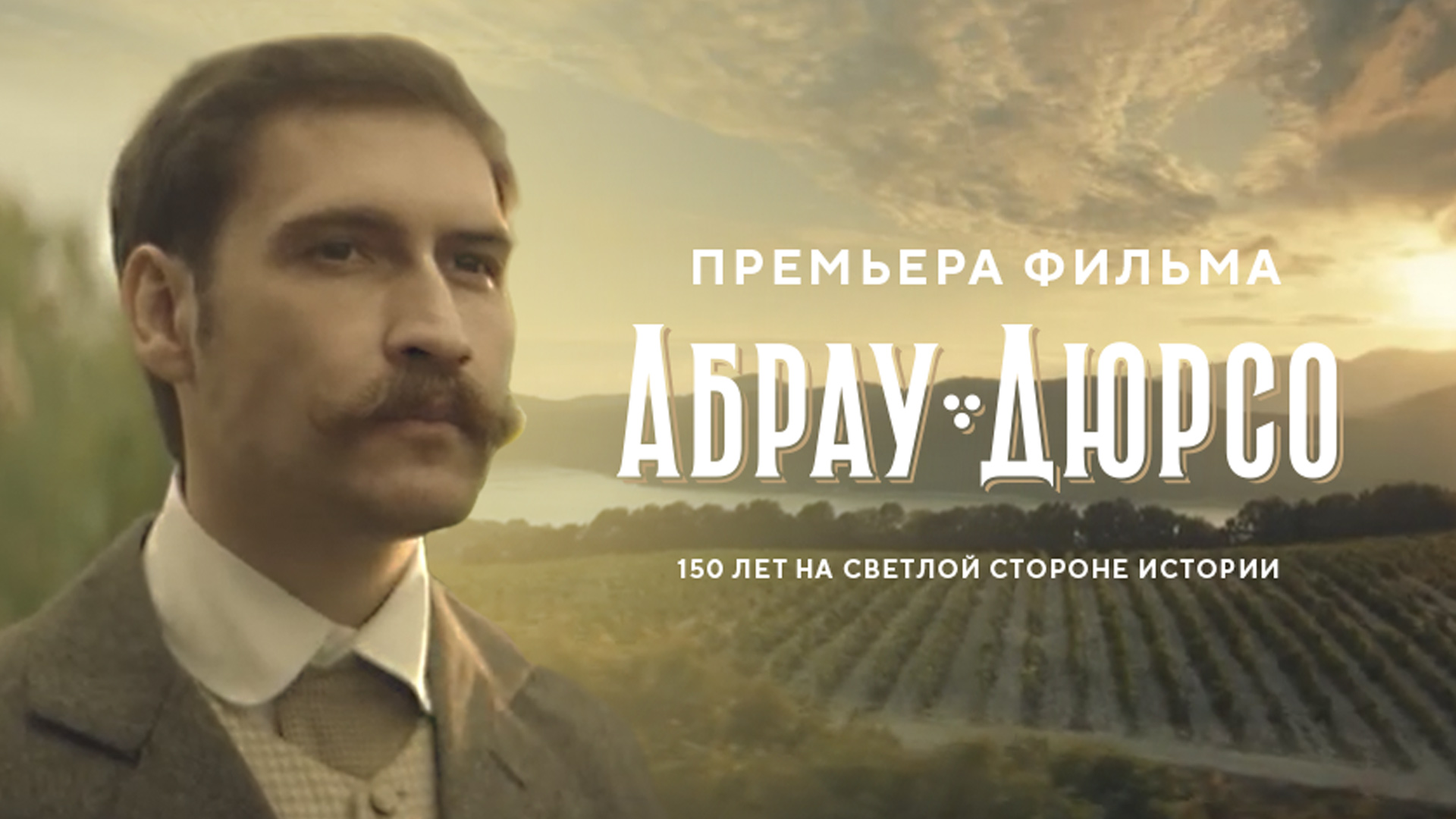 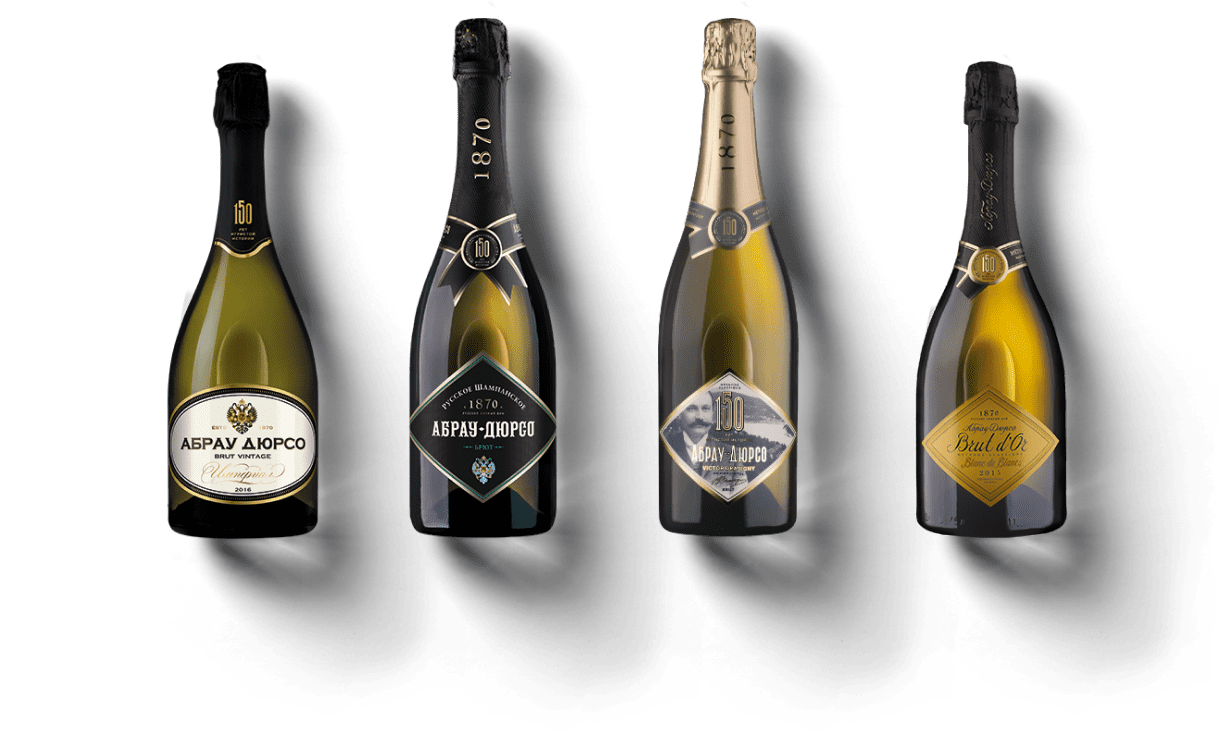 The legendary brand Abrau-Durso has been a byword for the best Russian sparkling wine for 150 years.

On 13th/25th of November, Emperor Alexander II ordered to found a wine estate between Lake Abrau and Durso River. The decree was signed only on February 3rd, 1871. Dmitry Pilenko, the first Governor of the Black Sea District, was entrusted with the management of Abrau-Durso estate (1867-1876). 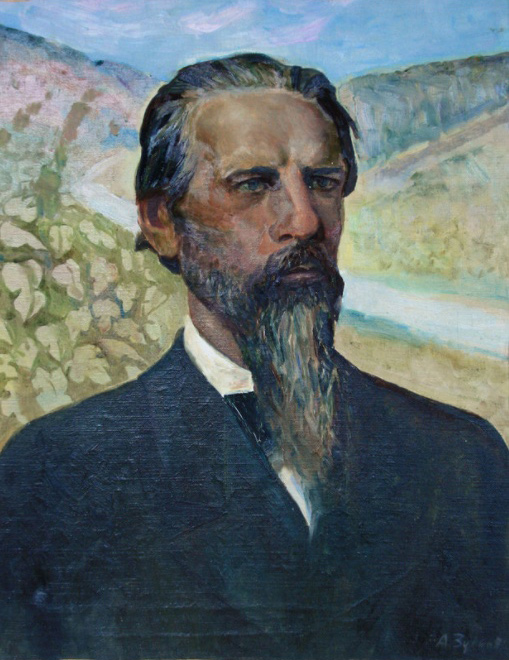 Fedor Ivanovich Geiduk, the first agriculturist of Abrau-Durso, was sent to Europe to select and purchase vines. In Johannisberg Austria, he purchased 10 thousand of selected Riesling Rhein vines and some Portugieser vines, which were mistakenly taken for Burgunder. 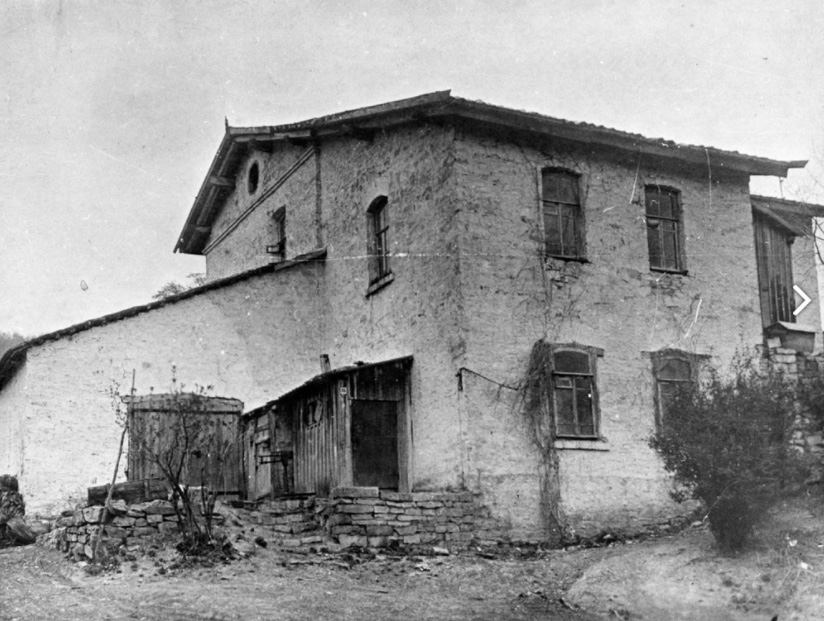 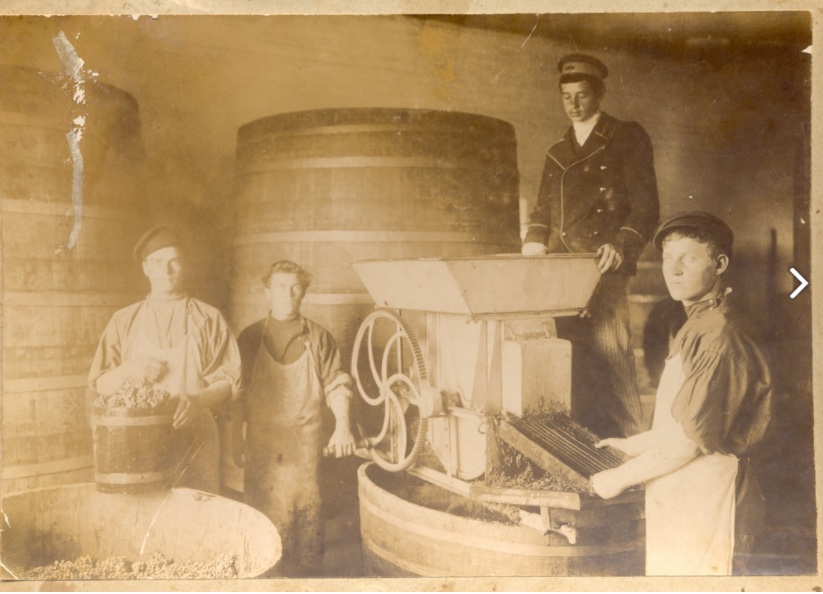 The first grapes was harvested and the first winemaking was carried out. 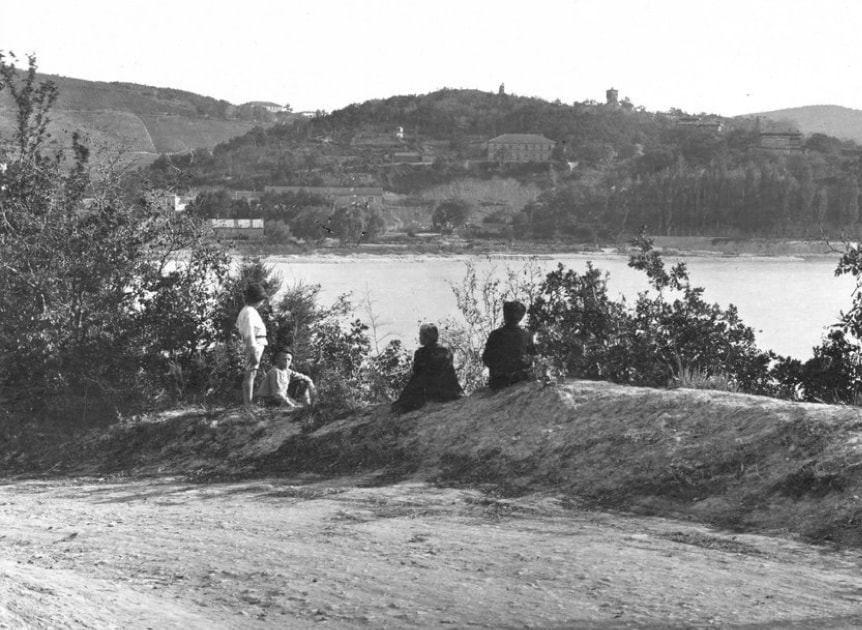 The first significant success of Abrau wines at the Yalta exhibition in 1884. Experts were impressed with their softness and subtleness and awarded them gold medals.

At the All-Russian Exhibition in Kharkov, samples of wines made from the harvest of 1883, 1884, 1885 using the vines of "Portugieser", "Bordeaux", "Riesling" and "Sauternes" were awarded a gold medal and a diploma with the inscription - "For excellent samples of red and white wine ". 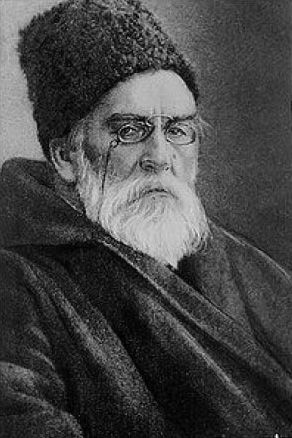 Alexander III appointed Prince Lev Golintsyn Chief Winemaker of Livadiy Royal Estate and of the Crimean and Caucasian appanage estates, which included Abrau-Durso. He would stay at this post from 1891 to 1898. 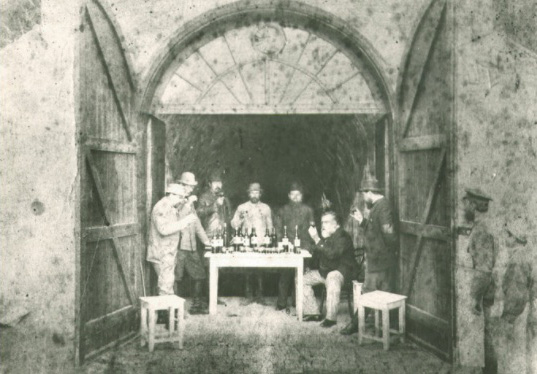 At the All-Russian Exhibition Riesling "Abrau-Durso" received a 1st degree diploma, ahead of the gold medal in importance. A recognized domestic expert, an official for special assignments under the Minister of Agriculture A.E. Salomon writes about the abrausky vines: "These wines, both Riesling and Portuguese, leave nothing to be desired, both in terms of bouquet and fullness and harmony of taste, they can satisfy the most refined and whimsical taste." 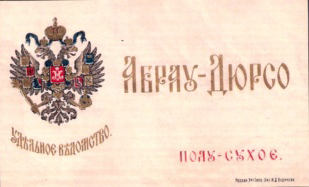 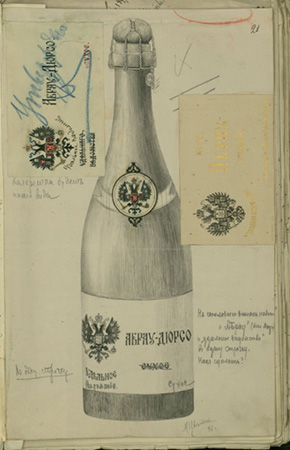 The first Abrau-Durso sparkling wine label with the national emblem was designed and the first 7,000 bottles with the new label were produced.

The first release of champagne "Abrau-Durso" on sale.

Construction of the Table Wine Cellar, a building that will become the architectural symbol of Abrau-Dyurso. The talented Russian winemaker Eduard Wedel is developing the technological standard for the famous Riesling and Cabernet wines produced as Abrau No. 63 and Abrau No. 44. 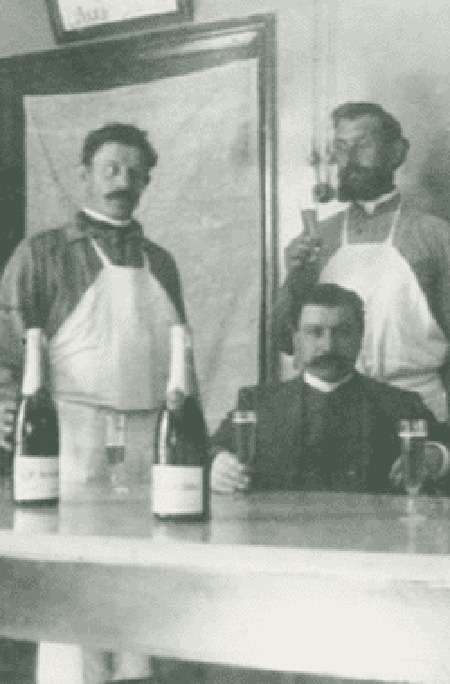 Frenchman Victor Dravigny was invited as chief sparkling wine maker. It is he who perfected the classical sparkling wine making method at Abrau-Durso. Victor Dravigny worked at Abrau-Durso in the years 1905-1919, a very hard time both for the estate and for the whole Russia. The winemaker received gifts from Emperor Nicholas II: a gold watch on a gold lace in 1909 and a gold cigarette case in 1913.

Abrau-Durso sparkling wines are served at official events of the Royal Court of Emperor Nicholas II.

By 1914, the Abrau-Durso specific estate was the most profitable winery and was estimated at 10 million rubles. The annual income was more than 1 million rubles. 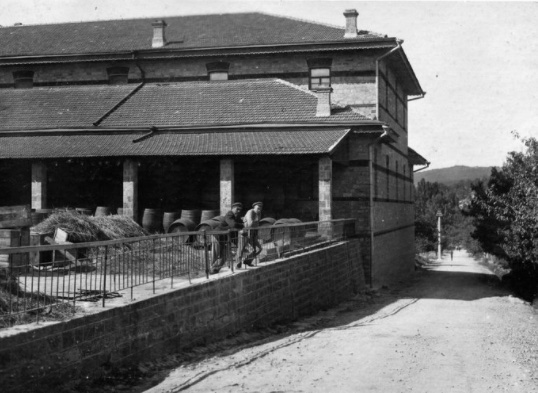 The revolution begins in Russia. The imperial times are over, the future is full of uncertainty. All appanage estates become nationalised, including Abrau-Durso.

A resolution on establishing Abrau-Durso Soviet estate managed by Eduard Vedel is passed. Anton Frolov-Bagreev, a talented and renown winemaking scientist, who invented the accelerated sparkling wine manufacturing method, was responsible for research. Abrau-Durso becomes a large-scale research centre and the only estate producing sparkling wines made by classic method in the USSR those years.

The factory was evacuated. Experts left Abrau-Durso. The most valuable equipment, some wines and developments were evacuated. From September 1942 to September 1943, Abrau-Durso was occupied by the Nazis. Before leaving, they blow up production, shoot civilians, take the population into captivity.

In mid-September 1943 the Abrau-Durso lands were liberated. Despite the ongoing war, local residents immediately began to restore the plant and vineyards.

A grandiose plant restoration project has been developed.

The state farm and the Abrau-Dusro champagne factory were awarded the Orders of the Red Banner of Labor for their great services in the development of viticulture and the production of champagne wines by decrees of the Presidium of the Supreme Soviet of the USSR.

For the first time in the history of our country, one hundred million bottles of "Soviet Champagne" were produced at all factories during the year. This solemn event was widely celebrated, and it was decided officially to remove the jubilee bottle from the Abrau-Dyurso production line.

Lake Abrau was announced a natural sanctuary. Felling of trees and using chemicals for processing vineyards on the adjacent lands was prohibited. All onshore vineyards were moved.

In 1975, Abrau-Dyurso developed the export brand “Soviet Champagne” Nazdorovya. Sparkling wine was supplied to the USA, Canada, Brazil, Mexico, Italy, Belgium and other countries. In the US market, Pepsico was the supplier. Nazdorovya has been featured in top American restaurants alongside European counterparts.

By the mid-80s of the twentieth century, the vineyard area was more than a thousand hectares. The distillery produced 3 million bottles of Sovetsky Champagne a year, as well as the famous Cabernet Abrau and Riesling Abrau wines. A huge contribution to the post-war period was made by directors D. Kravchenko and B. Anashkin, champagne winemakers E. Klotsy and Y. Tamoyan.

On May 7, 1985 the Resolution of the Central Committee of the CPSU and the Council of Ministers of the USSR "On measures to overcome drunkenness and alcoholism" was published, as a result of which vineyards and wine-making farms were seriously damaged throughout the territory of the former USSR.

An important role in the preservation of the plant and vineyards in the difficult 1980s-90s was played by its director N. N. Klochko, who headed the plant until 1997. Nikolai Nikitovich was awarded the Order of Lenin and the Order of the Red Banner of Labor, and in 1997 he became an honorary citizen of the city of Novorossiysk. 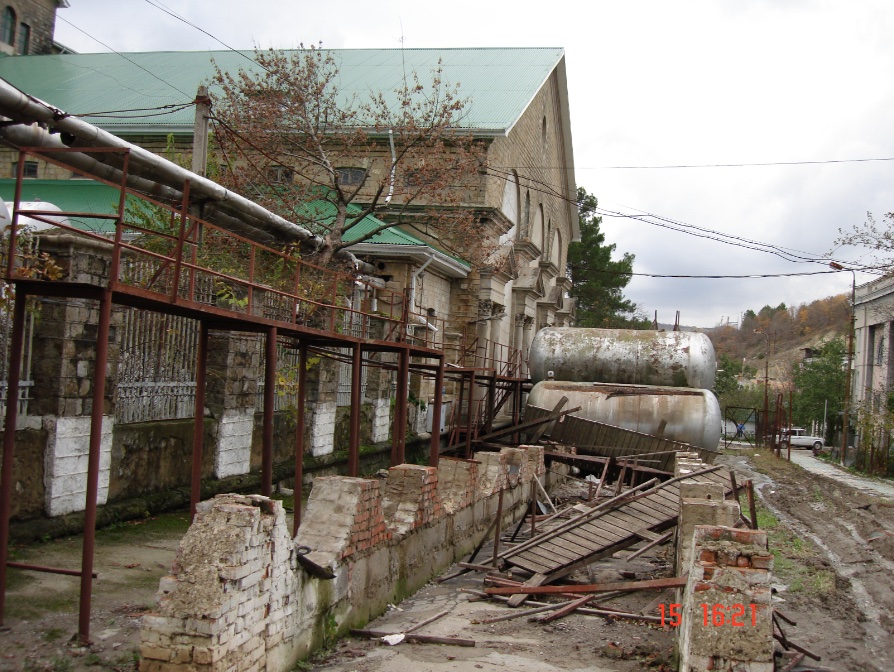 By the beginning of the 21st century, more than half of the vineyards are lost. Some controversial and sometimes destructive decisions are taken, owners come and go. Abrau-Durso is at the vanishing point. 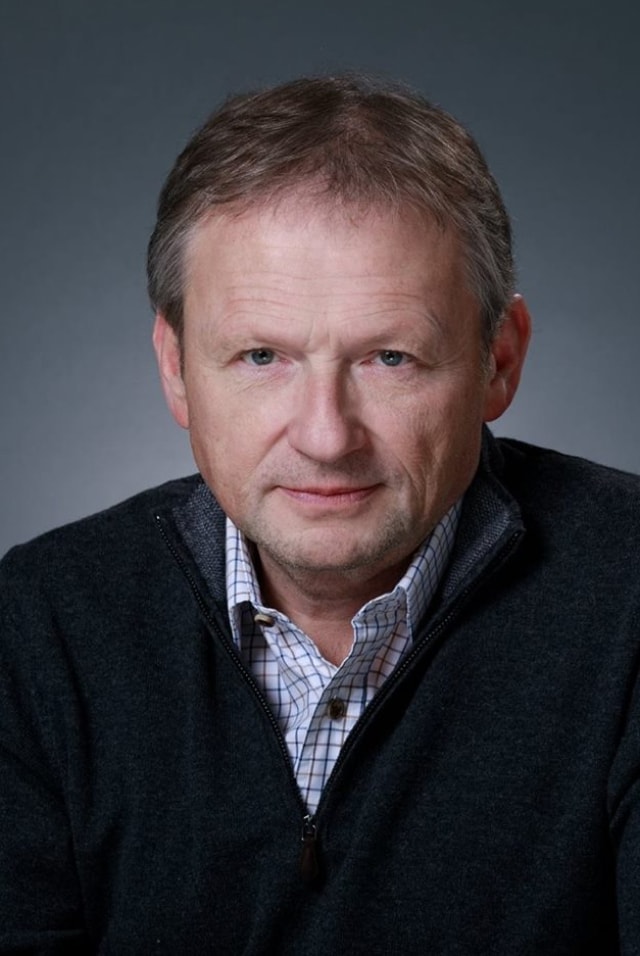 SVL Group headed by Boris Titov acquires Abrau-Durso. The rebirth starts with his desire to preserve and multiply the great historical traditions of the Russian winemaking. 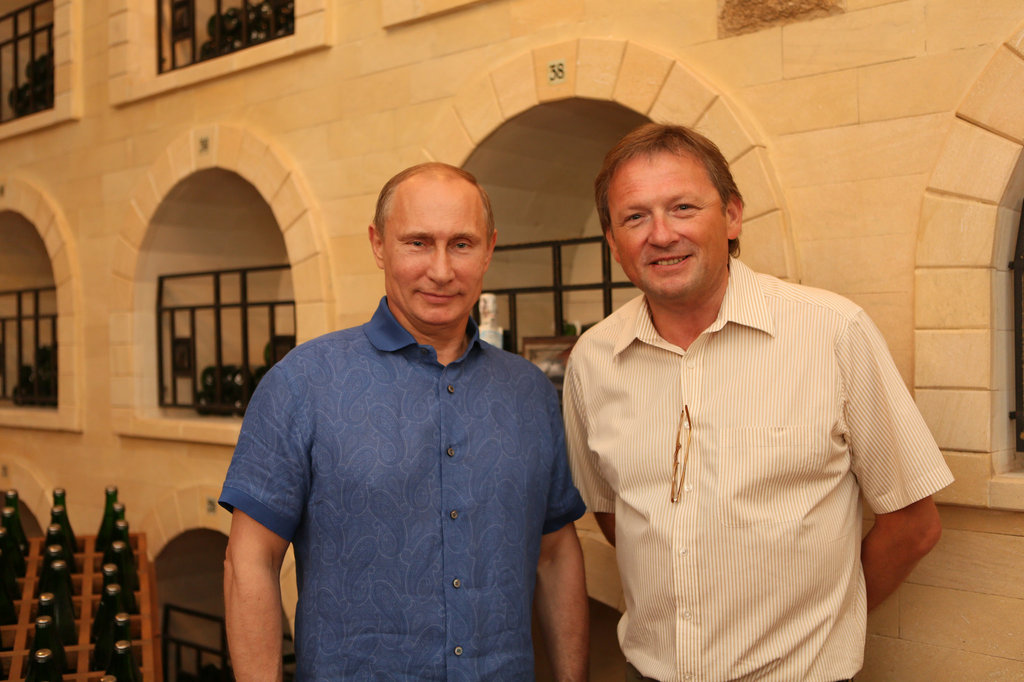 A field meeting of the Government devoted to Russian winemaking development headed by Dmitry Medvedev takes place in Abrau-Durso.

Abrau-Durso gathers a record crop: 10.5 tonnes of grapes per hectare.

In the year of its 150th anniversary, Abrau-Dyurso tenfold increase in the production of sparkling wine compared to the 1980s. The total area of vineyards after the acquisition of the Yubileinaya agricultural company reaches 3.3 thousand hectares; the area in the historical terroire is 730 hectares. During the year, still and sparkling wines under the Abrau-Dyurso brand receive 31 medals at the largest international wine competitions: International Wine and Spirits competition, MundusVini, Decanter and IWC. 3 gold, 8 silver and 20 bronze. Wines are exported in over 20 countries. The Abrau-Dyurso settlement is becoming the largest wine tourism center in Russia. The historical complex of the Russian Wine House is included in the list of the best attractions in the world by Trip Advisor, one of the most influential international travel platforms. The Villa Rose restaurant wins the Palm Branch nomination in the framework of the Palm Branch of the Restaurant Business 2020 award. Choice of guests. Local +. Shopping facilities of the Abrau-Dyurso Tourism Center become the best in the federal competition “Trade of Russia”.